On 6 November 1890 gunshots rang out at University College and Dr James Franck Bright, Master of the college, was found shot in the stomach.

The shooter fled the scene but was easily identified as Catherine Theresa Riordan.

Catherine had previously been in a relationship with the Junior Dean of the college, one John Thomas Augustine Haines. The relationship had begun two years previously and Haines was known to have given large sums of money to Catherine, including a gift of £50 (over £6,000 today) just a year previously.

Haines later claimed that he had made it clear to Catherine that their relationship was over and that there would be no further gifts, but Catherine apparently believed that Haines had committed to marry her.

When Catherine heard that Haines was engaged to marry Dr. Bright's daughter, she became almost deranged with fury. She sent letters to Haines in which she threatened to kill herself, to kill every member of Dr. Bright's family, and stated 'I am nearer to you every day than you think, and, By God, I will be a murderess'. 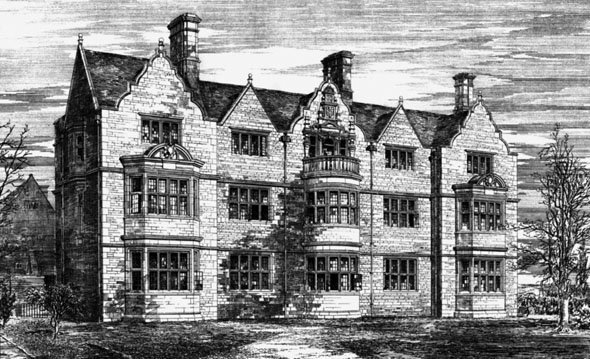 The Master's Lodge at University College

Catherine carries out her threat

On the morning of 6 November, Catherine had presented herself at the residence of Dr. Bright and demanded to see first Haines and then Dr. Bright's daughter. These requests were initially refused, but Haines eventually agreed to speak to her.

It is not known what words were exchanged between the two, but the discussion clearly became heated enough that Dr. Bright felt forced to intervene. At this point Catherine left, only to return later, this time asking to speak to Dr. Bright.

When Dr. Bright appeared, she shot him in the stomach and then fled.

Catherine initially fled to London but was soon arrested and returned to Oxford to be tried on 13 November. Catherine initially tried to claim that she wasn't in Oxford at the time of the shooting. However the numerous witness statements contradicted this and the jury was not fooled.

Despite the letters containing Catherine's threats to shoot Dr. Bright and his family, which appeared to show clear premeditation, Catherine was ultimately not convicted of attempted murder but the lesser crime of wounding with intent to do grievous bodily harm.

The judge sentenced Catherine to six years of penal servitude, which she served in Knaphill Female Convict Prison in Woking.