A map of St. Clement's, circa 1898, with the disused grave yard clearly marked.

A roundabout above a graveyard

Oxford residents who regularly travel around the roundabout known as the Plain may be surprised to learn that their car, bus or bike is in fact traveling across the top of a graveyard!

The area known today as the Plain was once the site of St. Clement's parish church. In its prime, it was a beautiful structure, joined on the western end by an unusual hexagonal tollbooth. However, by the early 19th-century, it was becoming increasingly clear that it was no longer for purpose.

The church's meagre 250-seat capacity, as well as its very small graveyard, were insufficient for the parish's burgeoning population, and its location was far from ideal. The building was hemmed in on both sides by two increasingly busy roads and the noise of traffic meant that it was hardly a place suited for quiet prayer and contemplation! 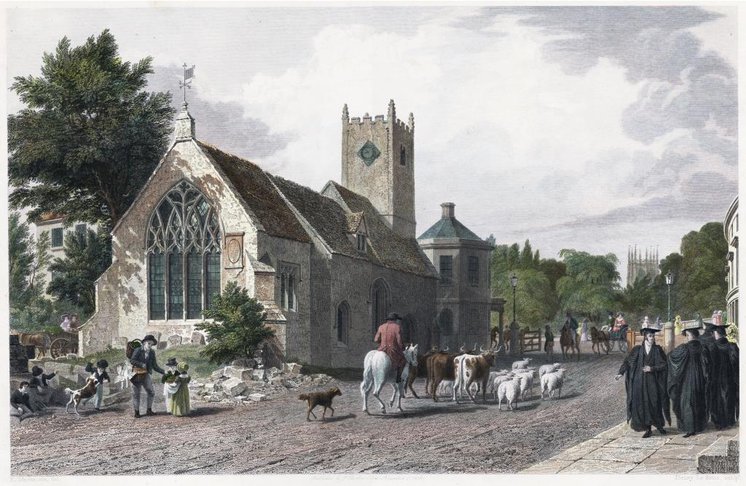 The parish church is moved to Marston Road

As a result of the above, the decision was made to build a new, more spacious parish church at a different location. The new church was constructed on the Marston Road (then Marston Lane), and was able to seat over a thousand parishioners.

The old church was demolished soon after to allow make more room for traffic in the area that became known as the Plain. The graveyard was left behind though, and could still be visited up until 1950 when today's roundabout was constructed.

What happened to the bodies?

Are there any bodies still buried beneath the roundabout? The first recorded burials at St. Clement's Old Church occurred in 1643, but the site had been a church for at least 300 years prior, implying that there would have been no shortage of bodies buried there.

Prior to the start of construction on the roundabout in 1949, as many known bodies as possible were respectfully removed and reinterred at the new churchyard on Marston Lane, along with their headstones. These are located at the eastern end of the churchyard, closest to the road, and are easily identified because they all face east to match their orientation at the Plain churchyard, whereas all of the more recent graves face north.

Big thanks to Colin (@theabingdontaxi) for supplying the above information regarding the reinterment of remains at the new churchyard.