Corpse lights, also called Will-O'-the-Wisps, Jack-O'-Lanterns or Ignis Fatuus, are phenomena that have reportedly been witnessed on numerous occasions near the old mill at Fringford.

Corpse lights appear as flickering lights seen moving close to the ground, usually at night time and often in graveyards or in areas of marshy, boggy ground. Scientists have explained them as being caused by natural phenomena such as bioluminescence (insects that glow in the dark) or by natural gasses released from the earth that ignite when they come into contact with air.

In folklore, these lights have been attributed to ghosts, fairies or elemental spirits, who will use their flickering lights to try and lure unsuspecting travelers to misfortune or even death!

In Folklore of Oxfordshire, Christine Bloxham mentions a number of sightings in the region of Fringford Mill. The lights were said to be seen during foggy weather in early winter.

The lights at Fringford Mill were said to resemble little red gnomes about three feet tall, but whose legs appeared to be concealed by the grass. These figures would move towards people making a strange sing-song sound. They would come within a few feet of you before moving away. Woe betide any who followed them! 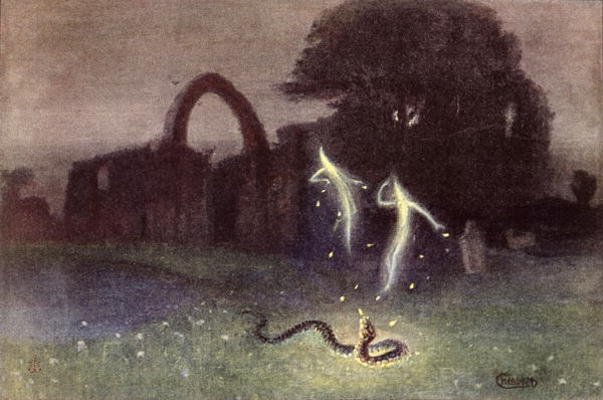 Miss Drake, who grew up at the mill, claimed that the lights once 'misled' her mother, causing her to very nearly fall into a backwater of the mill stream.

The Fringford corpse lights were blamed for the deaths of two young girls who were hit by a car on the road near the mill in the 1970s. Locals believed the lights had 'seduced' the girls on the grass verge, causing them to stray into the busy road.

Fringford was particularly hard hit during the 1918 influenza pandemic, which was said to coincide with a peak in 'corpse light' activity near Fringford.