A vintage postcard of Shipton-Under-Wychwood

In An Oxfordshire Christmas, Morrie Harris recounts a humorous local story from 1894 in which a drunken dare to steal a skull ends with the story's protagonist outwitting his friends.

According to Harris, at one time the churchyard at Shipton-Under-Wychwood contained a 'kind of bone house or hole where bones that were dug up in the churchyard have been put from time out of mind'. This grim location was well known to locals, but few dared to enter it, particularly after dark.

One resident of Shipton-Under-Wychwood was noted for his low intelligence, and one night in the village pub some of his mischievous friends tricked him into accepting a wager. 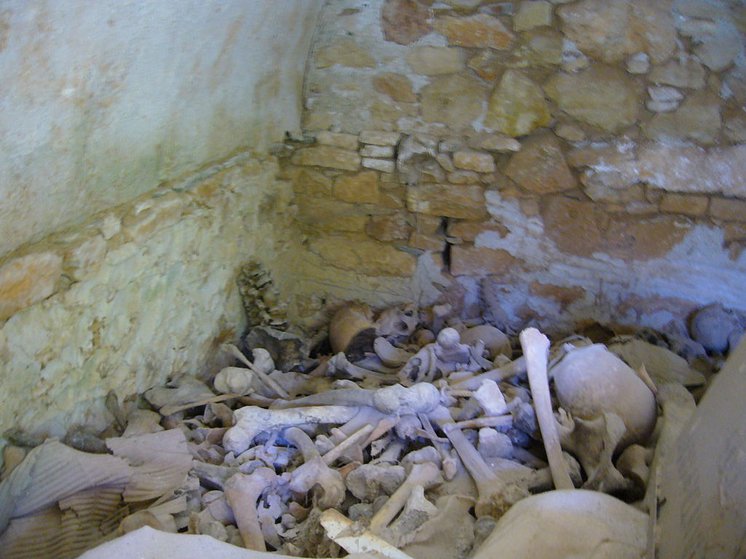 When the dim-witted man entered and picked up a skull, one of his hidden friends called out "Put that down, it's mine!".

Undeterred by this outburst seemingly from beyond the grave, the man put the skull down and picked up another. From his hiding place his friend again called out "Put that down, it's mine!".

"What? Do you have two heads? Then I'll have one of them!" said the man, and exited the churchyard with the skull, and won the wager!

Does Shipton-Under-Wychwood have a charnel house?

Charnel Houses of the kind described in this story are unusual, but not unheard of in England. They are more typically found in built-up cities where the limited space for new burials in existing churchyards results in the need to excavate unmarked graves to make room for new ones.

I haven't been able to find records of a charnel house at St Mary the Virgin church, but this doctoral thesis by Nicola Lowe does mention bones being dug up and reinterred at the church in 1732 to allow the crypt under the south aisle to be made the private vaunt of the Reade family.