The Murder of Mary Hanna Allen

Mary Hanna Allen's life first took a sad turn at age nine when both her parents died and she went to live with her grandparents in Cassington.

But her life was destined to end in tragedy after she began a romance with Harry Rowles.

Harry appears to have been a charismatic but unstable young man. Since his childhood, he had been subject to mood swings that would see him uncontrollably angry one moment and consumed with self-destructive depression the next.

Before meeting Mary he had attempted suicide but been saved by medical aid, then impulsively joined the Royal Artillery. However, the military life did not suit his wayward nature and he soon abandoned his military career and returned home where he continued to terrorise his family with his violent mood swings. It was around this time that he acquired a revolver.

It's not recorded how he met Mary Allen, but it was around the same time that he inherited £1000 from his mother. He burned through this money quickly, spending some of it on Mary but seemingly most of it on alcohol.

At first, Mary clearly returned his affections. In fact, right up until her murder she seems to have genuinely held a torch for Harry. Despite this, his unpredictable and erratic behaviour ultimately cooled her affections and she finally end their relationship in July 1877.

Harry did not take the rejection well and continued to pursue Mary for many months. On Friday 14 December 1877 Harry had spent the day drinking in Islip before returning to Cassington to try and speak with Mary. The meeting ended acrimoniously, with threats of violence from Harry against Mary and her family. Mary's grandfather took these threats so seriously that the following day he approached a local magistrate to ask for protection from Harry Rowles for him and his family.

The same day Harry returned to Cassington where he installed himself in the Red Lion pub and sent a message to Mary via a Mrs Hazel, inviting her to join him. Harry was apparently concerned that some of the threats he had made against her and her family the previous evening could cause problems for him if made public. Mary declined to join him at the Red Lion, or even exchange messages with him. 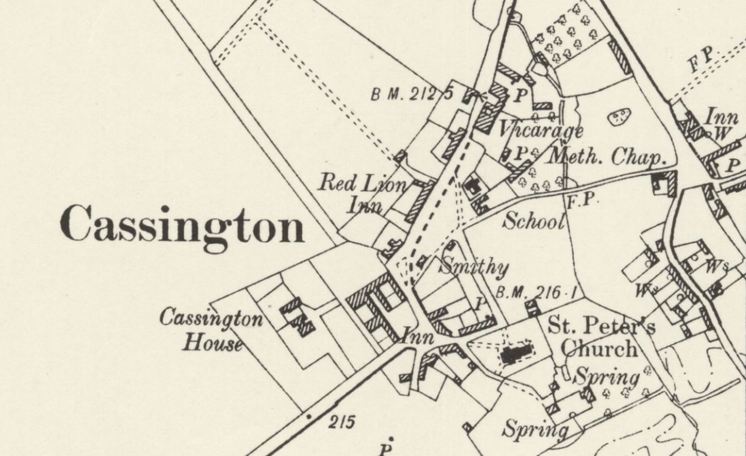 Map of Cassington circa 1898, showing the Red Lion Inn.

"Oh Harry dearest, what are you going to do?"

Unhappy with this response, Harry went to see Mary at her home, Hampden House. Mary's family were all out at the time, and Rowles had little trouble in gaining entry to the house.

A servant girl reported hearing Mary and Harry arguing, and Harry saying 'I shall be pulled! I shall be hanged!' and Mary crying 'Oh Harry dearest, what are you going to do?'

Fearing the encounter would turn violent, the servant girl rushed next door to get help. However, before the neighbours could enter the house they heard the sound of gunshots and Mary screaming.

Looking through a window they could see Harry Rowles brandishing a gun and Mary lying on the floor.

Harry initially refused to let the neighbours in, but they eventually managed to calm him. Harry claimed that he was mad, and announced that he was going to hand himself into the police. A neighbour accompanied Harry to the local constable, and Harry allowed himself to be locked up at Woodstock police station.

While he was in transit Harry continued to bemoan his lot, complaining that he had spent £300 on Mary and given her gifts which she hadn't returned. He also again claimed that he was mad, that he couldn't help himself, and that the devil had made him do it.

Medical assistance was called for Mary, who had been shot twice in the arm and once in the back, damaging her spine. The valiant Mary fought for life for three days before sadly succumbing to her injuries..

Harry Rowles was tried at the Oxford Assize in March 1878. During the trial love letters between Mary and Harry were read out and Harry's defence council tried to make much of letters that implied that Mary had flirted with other men in order to make Harry jealous.

Harry's sister also took the stand to testify to her brother's fragile mental state, saying that he had a weak mind and suffered from delusions.

Not of this was enough to excuse Harry's crime. He was found guilty of murder and hanged on April Fool's Day 1878. Mary's grave can be seen in the churchyard at St Peter's Church, Cassington.