The River Evenlode at Charlbury

Beating the Bounds Tragedy at Charlbury

Beating the Bounds is a centuries-old tradition practiced in parishes across England, but on 29th May 1924 this quaint ceremony ended in tragedy for the people of Charlbury.

About beating the bounds

On Ascension Day (roughly 40 days after Easter) villagers in England and Wales would gather together and make a formal perambulation of the parish boundaries, ceremonially 'beating' the bounds with branches and sticks. In some traditions, the young people who made up the procession would also be whipped along the way to encourage them to remember where the parish limits lay!

The purpose of this was to reaffirm in peoples minds where the parish boundaries lay at a time when there were few maps and literacy was rare. What lay within a parish was important for resolving disputes such as who had the right to be buried in a particular parish churchyard or receive financial support from the parish, and who was obligated to pay for things like parish church upkeep. 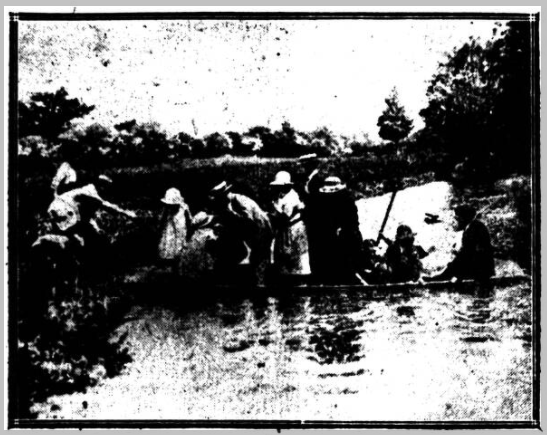 A photo that appeared in the Oxfordshire Weekly News (Wednesday 4 June 1924), showing one of the earlier punts successfully crossing the river.

A fun day out ends in disaster

By the 1920s, beating the bounds had become more of a fun day out than a ceremony with a serious purpose. When the people of Charlbury gathered together in May 1924, there would have been an atmosphere of celebration as the group set out around the familiar route.

As Charlbury lies on the picturesque Evenlode valley, the route taken by the party required them to cross the river to the southwest of the village. As there was no bridge on the boundary, the villagers were loaded into punts and rowed across the river.

The river was not wide, in fact only a little wider than the length of the punt, but the current below was strong. Two punt-loads of villagers were safely transferred across the river, but when the punt made its third and final trip disaster struck.

According to witnesses, the accident was caused by a number of children who stood up in the punt while it was in motion, causing it to overbalance and capsize. The punts occupants were thrown into the water, and were forced to swim for their lives. Not all made it to the safety of the bank.

Initially, it was thought that only one person had not reached the bank. Sixteen-year-old Evelyn Pickett had been seen clinging to a fourteen-year-old boy as he attempted to help her to safety. Sadly, Evelyn's strength gave way before the bank could be reached and she was seen to lose her grip on the boy and slip under the water.

The police were summoned, the river was dragged and eventually, Evelyn's body was recovered. However, the dragging also recovered two more bodies that were identified as those of ten-year-old Cyril Smith and twelve-year-old James Bishop, both of whom had been on the doomed punt when it capsized but whose drowning had not been noticed in all the confusion.

At the inquest that followed, the jury returned a verdict of 'accidentally drowned'.