An unusual ghost was reportedly witnessed by Mary Ogilvie at Jesus College in 1947, which is believed to be connected to a Civil War legend.

In the account in Richard Holland's Oxfordshire Ghost Stories, Mary Ogilvie was wife to the then-Principal of Jesus College and was woken one night by the sound of a dog barking. Looking down into the Principal's garden, she saw a strangely dressed man digging holes in the lawn. She woke her husband who looked out of the window to see the man already starting on a third hole.

Her husband did not want to confront the man, and the two returned to bed with the intention of resolving the issue with the college in the morning.

However, the following morning the lawn appeared completely undisturbed.

The Ogilvies later learned of a story from the 17th Century that they believed shed some light on what they had seen. According to legend, William Villiers, 2nd Viscount Grandison, returned to Oxford after being wounded fighting for the Royalist cause at Bristol in 1643. To his anger, he returned to find his wife with a lover!

Villiers immediately challenged the man to a duel. Unfortunately, the injured Villiers was in no fit state to fight a duel and was swiftly dispatched by his opponent. Not wanting to draw attention to their affair, Villiers unfaithful wife and her lover secretly buried Villiers body in what later became the Principal's garden. 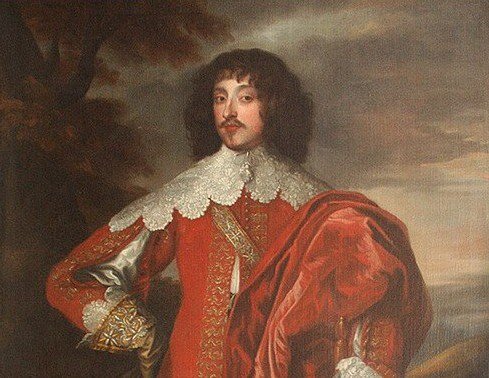 While this is undoubtedly a fine story, it doesn't explain why the ghost Mary Ogilvie saw was digging three separate holes!

The story also doesn't tie in with historical facts. After being injured during a cavalry charge at Bristol, Villiers actually died of a fever. His body was then returned to Oxford where it was interred at Christ Church Cathedral.

However, Villiers widow did remarry suspiciously soon after her husband's death, this time to Villiers's first cousin Charles Villiers, 2nd Earl of Anglesey. There may have been rumours that their relationship pre-dated her first husband's death!