Doom paintings were once a common feature of English churches but few survived the English Reformation, and today encountering a medieval doom painting can come as something of a shock for the unsuspecting church-goer.

The broad purpose of a doom painting was to remind churchgoers of the rewards laid out for the pious in heaven, but also to warn of the torments that unrepentant sinners could expect come the last judgment. To these ends, it was in the interests of the painter to make the 'hell' side of the painting as terrifying and grotesque as possible! 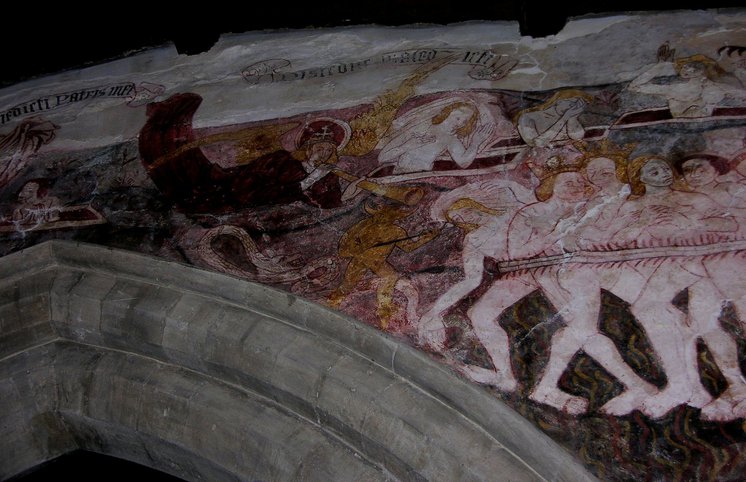 A close up of tormented souls in the South Leigh Doom painting. Credit: Giles Watson's poetry and prose, licensed under CC BY-SA 2.0, via Flickr

Angels and Demons at South Leigh

South Leigh is blessed with an eye-popping example of a 15th-century doom painting that covers most of the wall above the chancel arch. To the left, the pious can be seen climbing out of their graves, summoned by the heavenly trumpets of angels, and being led left where a welcoming St. Peter ushers them along a golden path to heaven. This image is captioned with the words ‘Venite, benedicti patris mei’ ('Come, ye blessed of my Father').

Those on the right of the painting are not so fortunate. They can be seen being pulled from their graves and apparently tied together by a sharp band that cuts into their flesh. They are then herded left by smiling yellow demons into the mouth of hell, represented by a huge-toothed red monster surrounded by flames. This side of the painting is captioned ‘Discedite, maledicti’ ('Depart, ye cursed').

One can only imagine how staring up at these terrible images every Sunday would have contributed to keeping the church congregation of South Leigh on the straight and narrow!