On 23 June every year school children parade through the streets of Burford carrying a huge dragon puppet in a ceremony that is thought to celebrate events that happened over 1200 years previously.

The Burford dragon ceremony commemorates the Battle of Burford in AD 752 at which Aethelbert, the Anglo-Saxon King of Mercia, was defeated by Cuthbert, King of the West Saxons.

The dragon referred to was the golden dragon that featured on the banner of the defeated King Aethelbert. After his defeat, his banner was seized by his victorious enemy and paraded through the streets of Burford. 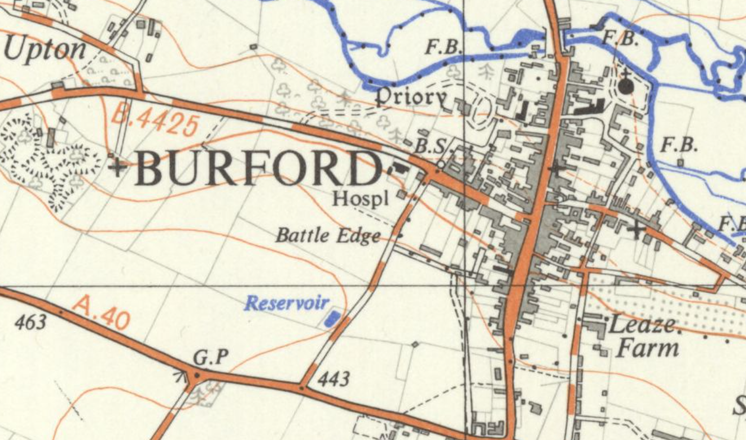 Maps of Burford showing Battle Edge, the field where the Battle of Burford took place.

The tradition of parading a dragon puppet through the streets continued until the 16th or 17th century, as is recorded by the 17th-century historian William Camden.

However, at some point after this time the tradition died out and was all but forgotten until 1971, when Burford school resurrected the tradition as part of the celebrations around the school's 400 year anniversary.

Since this time the dragon procession has occurred annually around Midsummer, although the official date for the event mentioned by William Camden is St. John's Eve, the 23rd June.

Footage of the 1980 Burford dragon parade can be seen on the BFI website.

The Burford dragon is not the only dragon in Oxfordshire. Dragon Hill, located nineteen miles to the south, just below the Uffington White Horse, is said to be the location where St. George slew the dragon. According to other legends, a dragon may be sleeping beneath the hill!

The Uffington White Horse and Dragon Hill are also associated with the legends of King Arthur, whose father was Uther Pendragon. It was from Uther Pendragon that the golden dragon motif used by King Aethelbert was borrowed.