The High Street Witney in Witney c1919. No. 46 is the building north of the Wes. Meth. Chapel.

The Grade II listed building at 46 High Street Witney was at one time haunted by the ghost of a previous owner who committed suicide, reports Joe Robinson in his book Oxfordshire Ghosts.

The building was originally built around 1730 and has housed many businesses over the years. In the years prior to 1930 it was the premises of the Gas, Coal and Coke Company. It was Mr. Lucklin, the unhappy manager of this company who took his own life in the living quarters located over the shop.

The building was then taken over by Jack Kemper who in 1930 turned it into a music shop. It was the manager of Kemper's Music Store Ken Cook who first reported the supernatural happenings. 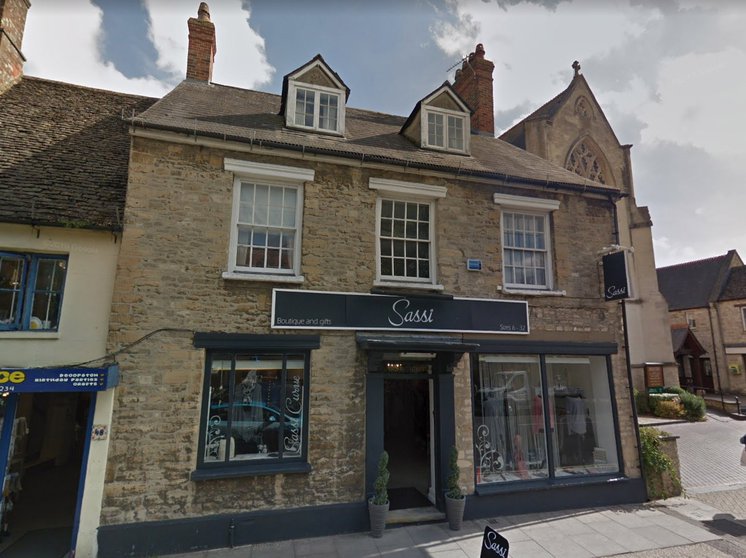 Ghosts at the music store

Ken began to sense a 'presence' and reported hearing footsteps around the building. He also heard strange noises coming from the floor above the shop, including footsteps coming down the stairs when nobody was present.

Other people who had no knowledge of Mr. Lucklin's death commented to Mr. Cook about the sound of footsteps heard on the first floor and coming down the stairs.

Eventually, Mr. Cook managed to rid himself of the unexplained sounds by the simple expedient of standing at the bottom of the stairs and loudly requesting that Mr. Lucklin kindly vacate the premesis! This apparently did the trick, as Mr. Cook reported no longer being troubled by strange sounds from the first floor.

In the 1990s the building was home to a branch of Unwin's Wine Shop, and the owner David Parsons did report a strange occurance that could indicate a return to the inexplicable events experienced by Mr. Cook.

Parsons's daughter was listening to music in her bedroom when she heard her name called, and assuming it was her father, she went to ask him what he wanted. Of course, her father had not spoken and did not know what she was talking about!