Illustration from The History of Witches and Wizards (1720)

James Jagger gained a reputation as a 'cunning man' in eighteenth-century Bicester. He specialised in finding lost items and uncovering thieves, but dark rumours also swirled that he had dealings with the devil!

James was born illegitimately and raised by one George Gurden at the turnpike house that once stood near the junction of Priory Road and Chapel Street in Bicester.

According to the account given by Christine Bloxham in her book Folklore of Oxfordshire, his career in witchcraft began in 1793 when he attempted to summon the devil! He was only partially successful in this. The devil appeared briefly before disappearing in a sudden clap of thunder, presumably before James was able to interrogate him.

Making a business of magic

James went on to find more practical uses for his supposed magical talents. He developed a reputation for divination, and in particular helping people to find missing objects.

One of his clients was the landlady of the Rose and Crown pub, Mrs. Saunders, who asked James to help her find a missing silver clasp. To do this, James first placed a basin of water in a passageway at the pub, and then locked himself in a separate room.

Exactly what rites and rituals he performed while locked in the room is unknown, but presently there was a 'sloosh' from the basin of water and Mrs. Saunders was amazed to find that the lost silver clasp had landed in the basin, apparently falling out of thin air! 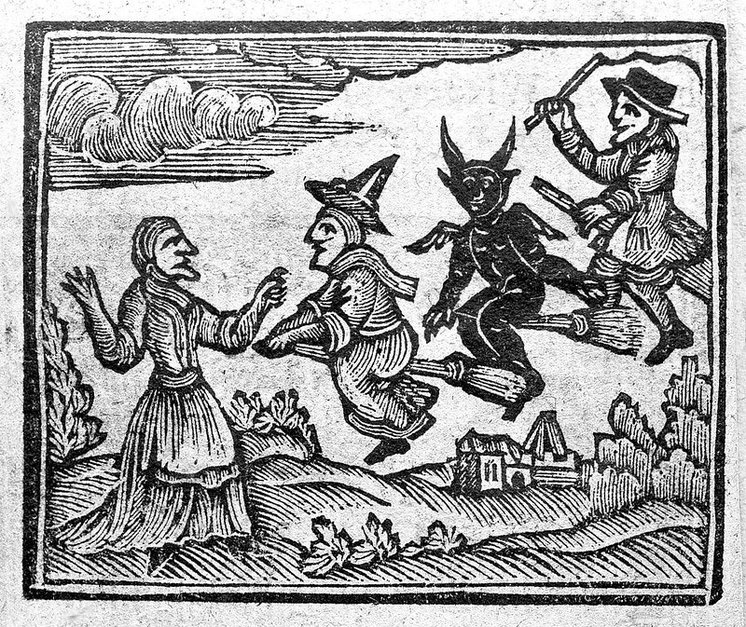 An illustration of witches and demons riding on broomsticks, from The History of Witches and Wizards (1720).

Unfortunately for Jason, his dabbling in magic did not come without consequences. On his way home from the Rose and Crown James was apparently seized by an invisible force who lifted him high into the air and off over the rooftops.

James was found the next morning four miles away near Kirtlington, complaining of having been dragged through hedgerows, dunked into ponds and ditches and generally roughed up by a group of mischievous demons! James claimed these demons resembled asses with panniers on their backs.