Magpie Lane is the modern name given to one of the side streets that join Oxford's High Street to Merton Street.

However, if you were to peruse early maps of Oxford you might be surprised to see it listed under a very different name!

What's in a name?

In the past, streets were often named after the principal business that took place there. In Oxford, some of these names have stood the test of time, such as Brewer Street (with its breweries), Beef Lane (with its butchers), or Bear Lane (where the city's bear-fighting pits were located).

For many hundreds of years, the principal business that Magpie Lane was known for was prostitution. It is for this reason that the road is marked on many early maps as 'Gropecunt Lane', a common name used in England for streets where sex work took place.

Such a graphic name was not unusual in England. Similarly named streets can be found on historical maps of many towns and cities including Bristol, York, Shrewsbury, Newcastle upon Tyne, Norwich, Worchester, Hereford and Southampton. London, perhaps unsurprisingly given its size, had a number of streets that went by that name. 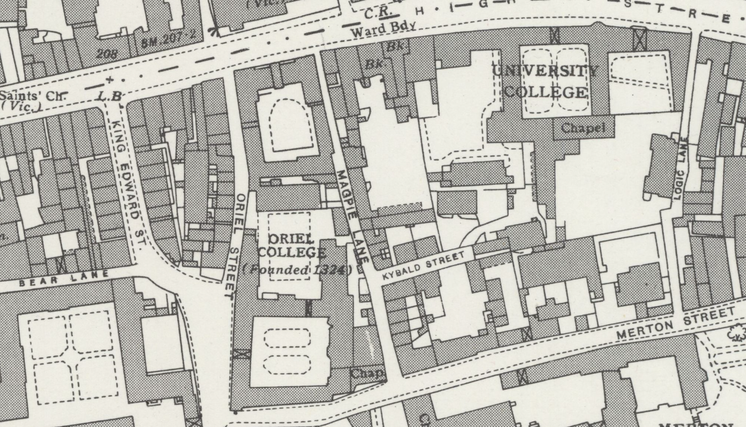 A map of Oxford from 1939, showing the street under its newer name, Magpie Lane.

Grope Lane gets a makeover

Over the years these street names were expunged to make them more acceptable to the increasingly delicate sensibilities of the general public. By the 13th century, the street started to appear on Oxford maps as just 'Grope Lane'.

By the time John Speed's made his famous map of Oxford in 1605, the street was being referred to as 'Magpie Lane', a name inspired by the magpie that adorned a prominent inn sign in the street.

Oddly, by the late 19th century the popularly used name seems to have swung back towards its original name, swapping its 'p' for a 'v' and becoming 'Grove Street'. This name appears on Ordnance Survey maps as late as 1938, before changing back to Magpie Lane in the 1939 revision of the maps.

For a long time the street now known as Bear Lane rejoiced in the name 'Shiteburne Lane'. It shared this name with a street in London known today in its bowdlerised form as Sherborne Lane.

The original name is a reference to the fact that, in the days long before home plumbing or inside toilets were dreamt of, both streets were used as public toilets!