In May 1891, Abingdon was reportedly troubled by a poltergeist who persistently threw objects through windows in the vicinity of West St Helen Street.

According to Nicola Sly's account in A Grim Almanac of Oxfordshire, the disturbances continued for a number of nights, drawing large crowds hoping to witness the supernatural events themselves.

Despite the crowds, the poltergeist activity continued unabated, with projectiles including potatoes and lumps of coal being thrown through glass windows in full view of onlookers.

The barrage of objects was apparently so persistent that locals complained that they could get no peace, and the police were summoned to investigate. 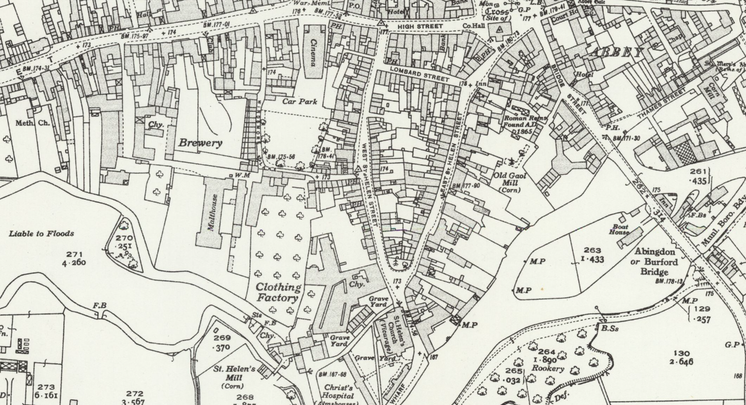 A map circa 1938, showing the St Helen's area of Abingdon.

The police clearly suspected that s more earthly prankster might be at large. As the projectiles often seemed to come from above, the roofs of nearby houses were searched but to no avail.

A continuation of an earlier haunting?

Nicola Sly doesn't record when the activity came to an end but does mention that many connected the activity with a ghost who was believed to haunt the area around nearby Ock Street some years earlier.

I've not been able to find any more information on this earlier Ock Street ghost, please get in touch if you have any more details!