Roger Bacon in his study

The Brazen Head at Brasenose College

Brasenose College's unusual name is believed to come from a bronze door knocker with an equally unusual story that used to be on the college's main gate but is now mounted in the college's dining hall.

According to legend, the knocker was created by Roger Bacon, the medieval thinker and Franciscan friar whose quest for knowledge led him into the realms of alchemy and astrology and acquired for him the reputation of being something of a wizard. 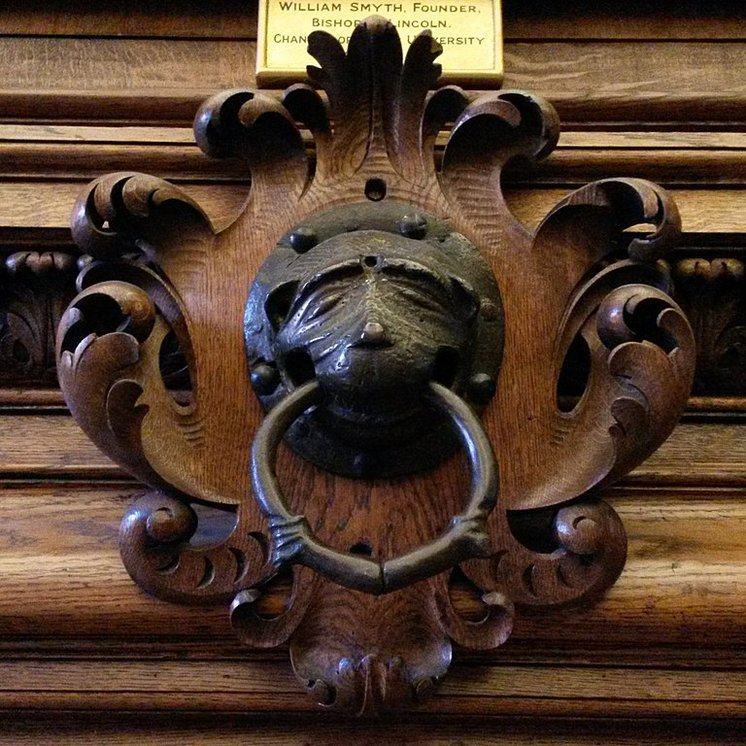 The knocker was supposedly created as a 'brazen head', a bronze head imbued with the power to speak and answer any question asked of it. Many mystics throughout history are said to have possessed similar items.

According to the story, after creating the head Bacon assigned the task of watching the head to his assistant Miles. Miles witnessed the head speak the words 'Time is', but didn't understand them so didn't alert his master.

Half an hour later the head spoke the words 'Time was', to indicate that the time to question it had passed, before promptly bursting into flames.

It is not recorded how Bacon reacted when Miles told him the news that his creation has worked, but he had missed it!

According to Kenneth Grahame, author of The Wind in the Willows, the narrow lane to the north of the college that leads from Turl Street to Radcliffe Square is haunted.

Grahame doesn't explain the nature of the hauntings, but in his essay Oxford Through a Boy's Eyes he wrote "I should not much like, even at this day, to pass along Brasenose Lane at midnight"!