St. Mary's Church is said to be haunted by a lady in grey, sightings of whom have been reported as far back as the 19th century.

The Lady in Grey is believed to have first appeared to the vicar during the 1880s, startling him while he was giving holy communion.

The vicar initially took her for one of his parishioners but was surprised by her Elizabethan-style clothing. He approached her while she was kneeling at the altar rail, only to have her vanish before his very eyes!

Creeping out the choir

Frank Mitchell, who was a choirboy in 1902, reported in a 1974 newspaper article that the presence of the Grey Lady was a regular topic of conversation amongst the choir.

While Frank never saw the lady, other boys, including the Vicar's son, claimed to have felt her brush past them on the narrow stairs leading up to the bell tower, accompanied by the sound of her rustling skirts. 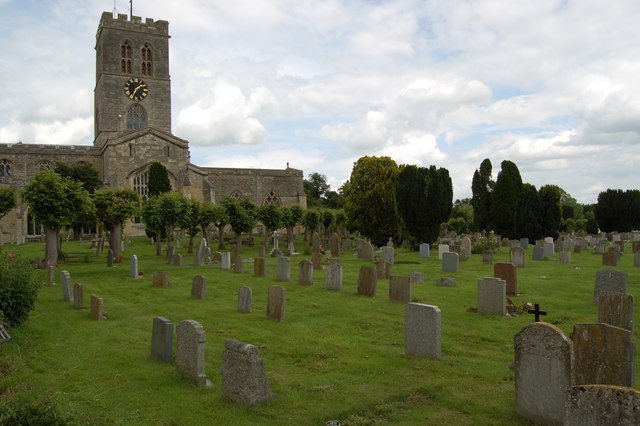 The churchyard at St. Mary's Church. Could the earthly body of the lady in grey lie beneath one of these headstones? Credit: St. Mary's Church by grahamthomas (CC BY-SA 2.0) via Geograph.org.uk

It wasn't just high-spirited choirboys who claimed to have encountered the Lady in Grey. During the Second World War, the tower of St. Mary's Church was used as a lookout post by the military.

Members of the Home Guard who were stationed in the church tower claimed to also have encountered the ghost. Like the boys, they would hear and feel her brush past them while climbing the narrow belfry stairs.

I haven't read any suggestions as to who the Lady in Grey may have been, or why she might haunt the church, but is it possible that the story may have become confused over time with another similar local haunting.

The village of Long Crendon, just over the border in Buckinghamshire, also has a St. Mary's Church which is said to be haunted by a woman in grey!