There have always been tensions in Oxford between 'town' and 'gown', but never so much as in 1355 when a drunken bar brawl between students and townsfolk escalated into three days of rioting that resulted in the deaths of 30 townsfolk and 63 members of the university.

A pub brawl gets out of hand

The incident started on St Scholastica day (10 February) when students drinking in the Swindlestock Tavern on the corner of St Aldates and Queen Street complained to the landlord about the poor quality of the wine they had been served. Angry words were exchanged and a cup of wine was thrown over the landlord, triggering a rowdy brawl that soon spilled out into the street.

Students came to their friend's aid, and passing townsfolk joined in the melee, and within 30 minutes a full-blown riot was in progress.

The Chancellor of the University arrived and called for calm, but was forced to retreat when arrows were fired at him, and the violence continued until nightfall.

The following day the Chancellor issued a proclamation at the church of St Martin and St Mary that none should bear arms, assault anyone or disturb the peace. However the town bailiff's had other ideas, actively encouraging the townsfolk to arm themselves, and allegedly going so far as to pay people from the surrounding countryside to come and join the mob that was forming.

The mob of townsfolk clashed with a group from the university at St Giles church, killing some and forcing the rest to flee to the Augustine priory. Later in the day a reported 2,000 people arrived from the countryside to join the townsfolk.

The students were outnumbered and were forced to barricade themselves into the colleges, while the mob outside turned their anger on the local hostelries, breaking into a number of inns and taverns and stealing food and drink. 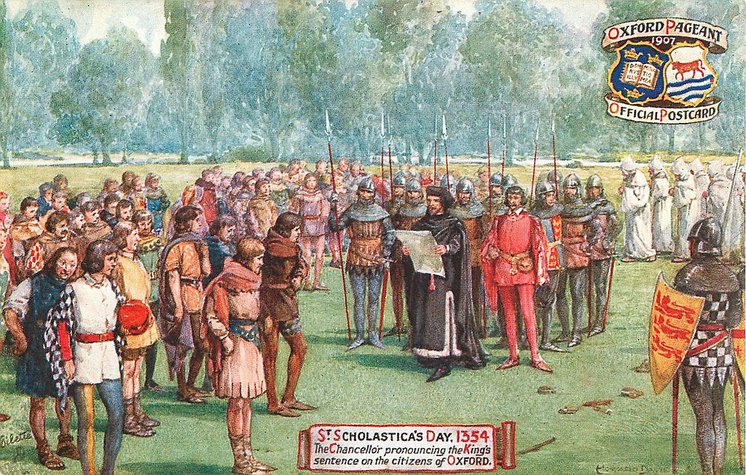 Postcard form 1907 depicting the Chancellor pronouncing the King's sentence on the people of Oxford. Credit: Howard Davie (1868-1943), via Wikimedia Commons

When the news of the rioting reached King Edward III at Woodstock, he issued a proclamation "that no man should injure the scholars or their goods under pain of forfeiture". This had little effect on the rioting mob, who continued their violence into the following day, breaking into further inns and taverns and killing any unfortunate members of the university they encountered.

By the evening of the third day the energy of the rioters had been spent, and many retreated back to the countryside, or to their homes. They left behind a city in disarray, with the corpses of students lying in the streets or floating in the river, many university buildings vandalised or abandoned and further parts of the city burned down.

An investigation leads to arrests

In the proceeding days, the king sent judges to the town to ascertain what had happened. These judges came to the conclusion that the townsfolk and town authorities were largely at fault and the mayor and bailiffs were sent to the notorious Marshalsea prison in London.

The town was also ordered to pay an annual penance to the University. Each year on St Scholastica's day the mayor, bailiff's and 60 townsfolk were required to attend a mass at St Mary's church, and pay a fine of 60 pence, one penny for each student reportedly killed in the violence.

This yearly penance continued until 1825 when the incumbent mayor Isaac Grubb refused to take part and the tradition was finally dropped.