Merton College, viewed from the south across Merton Field.

J.R.R. Tolkien, the author of The Hobbit and Lord of the Rings, studied at Exeter College and spent much of his academic career at Pembrooke College, but it is Merton College that his ghost is believed to haunt.

In 1945, Tolkien moved from Pembrooke to Merton College to take up the role of Professor of English Language and Literature. He had published The Hobbit eight years previously to moderate success and was in the process of writing the third book of Lord of the Rings when he moved to Merton.

Tolkien stayed at Merton until his retirement in 1959 and had a study in Fellow's Quad, overlooking Christ Church Meadow. After his retirement, Tolkien left Oxford and moved to Bournemouth with Edith, his wife of 55 years.

After Edith's death in 1971, the heartbroken Tolkien returned to Merton College, living in a flat provided by the college on Merton Street. 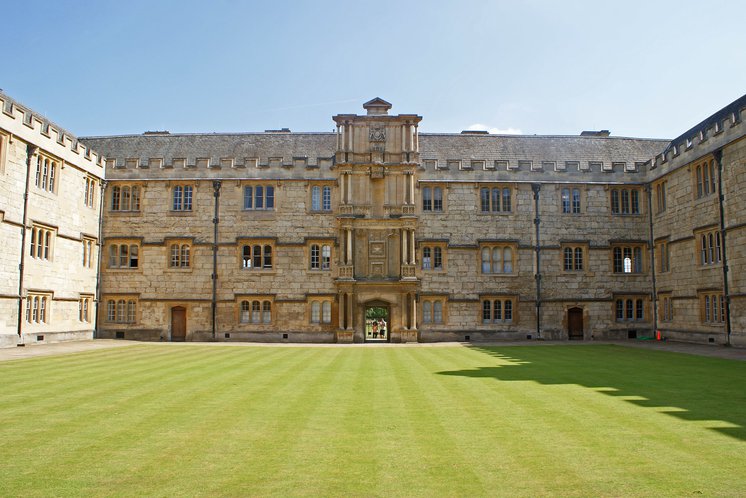 The Fellow's Quad at Merton College, where Tolkien had a study. Credit: Caro Wallis, licensed under CC BY-NC-ND 2.0, via Flickr.

With his tweed jacket, waistcoat and a pipe rarely far from his mouth, Tolkien struck an easily recognisable figure about the college. His ghost is said to be no less recognisable, and is occasionally seen drifting along the corridors and across the quads of Merton College.

Later occupants of Tolkien's study in the Fellow's Quad at Merton are said to have reported smelling inexplicable gusts of pipe smoke, as if Tolkien had been there just moments before.

Ghosts of the Inklings?

Tolkien was part of a group of similarly literary friends at Oxford who called themselves the Inklings. The group included the likes of C.S. Lewis and Charles Williams, but also a larger rotating group of friends and acquaintances who would meet on Tuesdays in the 'rabbit room' at the Eagle and Child pub in St. Giles (and later the Lamb and Flag across the road) to discuss and provide feedback on each other's literary projects.

Although many fans visit the 'rabbit room' in the hope of glimpsing the ghosts of their heroes, it is the pub's cellars that seem to be the focus of supernatural activity. A previous landlord has reported an unnerving encounter with a vanishing woman while down there changing a barrel.