Tombs and Prophecies at North Leigh

There are a number of curious legends surrounding St Mary's Church at North Leigh.

The chantry at North Leigh church contains a 15th-century tomb to two members of the local gentry, Sir William Wilcote (or Wylcot) and his widow Lady Elizabeth Blackett. The tomb features an effigy of Lady Elizabeth lying with her hands together as if in prayer, but the hands are not quite touching.

Local legend has it that the hands are slowly moving further apart, and when they are fully apart, the pair would return to haunt the village. One strand of local legend says that when they return their specters will climb nearly Perrott's Hill to 'look for their treasure'.

However, this legend may have become mixed up with the history of another local family, the Perrott family, who owned the manor of North Leigh in the 17th century. The family lived in a mansion in the valley below Perrot's Hill, but part of their mansion was demolished in 1765.

Rumour had it that the family treasure was buried beneath the ruins, only to be rediscovered by a subsequent owner of the mansion who became suddenly rich during the 19th century. 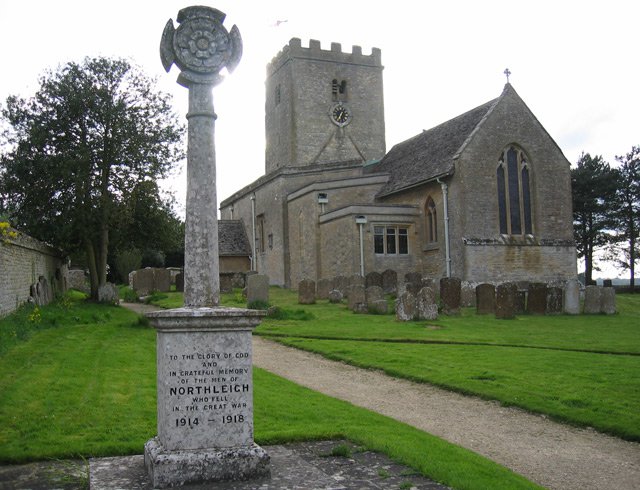 Another legend associated with North Leigh church is the story of three girls who had attempted to carry out a love divination ritual with the aim of finding the identity of the men they were going to marry.

This involved going to the church on Christmas Eve and each walking three times around the churchyard and throwing hemp-seed over their left shoulder while reciting the following rhyme:

"Hemp-seed I scatter, hemp-seed I sow;
He that is my true love, come after me and mow."

According to the ritual, after the third lap, they would be able to look over their shoulder and see a vision of the man they were destined to marry following behind them, mowing the plants that grew from the seeds they had sown.

However, this ritual turned out badly for the three girls. The first reported that she had seen nothing, and went on to die a spinster at age 83. The second ran back to her companions shrieking in fear, saying she had looked over her shoulder and seen a coffin following her. The unfortunate girl died only a few months later.

Understandably, the third girl decided not to take her turn!