The River Windrush, looking South East from the bridge on Bridge Street.

A Ghost in the Windrush at Witney

The ghostly body of a drowned man can be seen floating in the waters of the Windrush as it flows below the bridge at Bridge Street, Witney.

According to local legend, the body is that of a novice priest who died at the hands of an angry mob one Easter.

As far back as the 11th century, the final day of the Easter religious holiday was celebrated in Witney with a large procession through town and across the River Windrush. During this puppets representing figures from the bible were carried aloft.

However, over time what started as a religious ceremony organised by the church had become a more rowdy celebration. It attracted people from far and wide who came more to drink and make merry amid a carnival atmosphere than to celebrate the death and rebirth of Christ.

As a result, the church abandoned the feast day, banned the processions, and cracked down on the celebrations that surrounded them. This decision went down poorly with the townsfolk of Witney who greatly enjoyed their Easter processions and the related opportunity for merry-making. 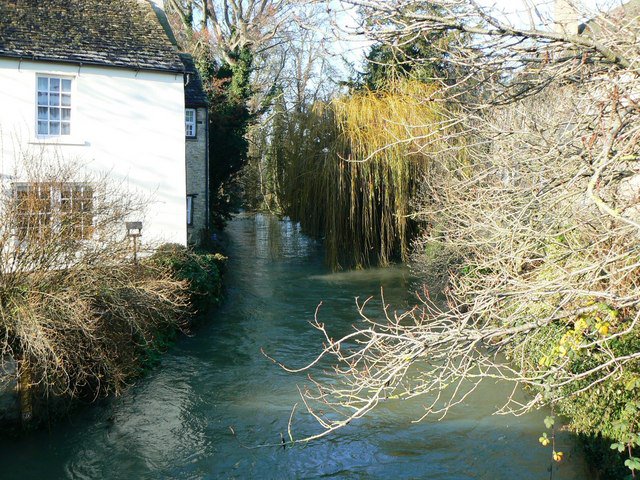 The next Easter an angry drunken mob formed in the centre of town and headed for the bridge in Bridge Street. The mob threatening to pull the bridge down if the church did not reverse their decision to ban the processions.

As the story goes, the novice priest confronted the mob and attempted to remonstrate with them. The mob's reaction was perhaps predictable. They seized the hapless novice and flung him over the bridge where he drowned in the rushing waters of the River Windrush.

Legend has it that if you go to the bridge on Bridge Street on the third evening after Easter and look down into the water below you may still see the ghostly body of the drowned novice floating face down in the river as the water passes below the bridge.