A Lordly Assault at the Randolph Hotel

Lord Randolph Churchill is known to history as the father of Prime Minister Winston Churchill and a forceful and influential Tory politician in his own right.

In 1870 he was a student at Merton College, Oxford, and a member of the notorious Bullingdon Club, whose members were known for their riotously drunken behaviour which often saw them falling foul of the law.

Lord Churchill is brought before the Vice-chancellor

In March 1870, the twenty-one-year-old Churchill was summoned before the vice-chancellor and the President of St. John's College after an incident that occurred outside the Randolph Hotel in Beaumont Street.

PC Partridge testified that he had seen Churchill exiting the hotel in a drunken state shortly after midnight. He claimed that Churchill then 'took hold of the constable, pushing and shoving him and taking hold of his cape'.

The constable was then similarly jostled and shoved by a group of around a dozen other students who had followed Churchill out of the hotel. 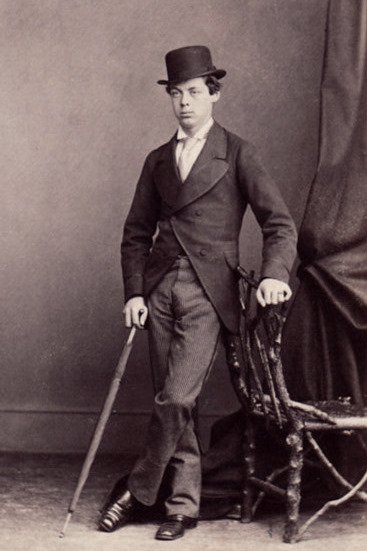 A photo of the young Randolph Churchull.

It seems that at this point Churchill may have attempted to placate the angry PC Partridge, offering him five shillings, which the constable refused. The mob then ran off down Magdalen Street with PC Partridge in hot pursuit.

Partridge accosted Churchill again, demanding to know his name and address. When Churchill refused to identify himself, the constable threatened to take Churchill to the police station, to which Churchill responded that he'd be happy to go there as he'd never been!

Churchill was then arrested and taken to the police station where he gave his full details.

The young Lord Churchill conducted his own defence, and according to the account in Jackson's Oxford Journal, he defended himself 'in a manner that would reflect credit on many a Barrister', perhaps unsurprisingly given that he graduated with a degree in Law and Modern History.

Churchill cast doubt on the constables account of events, forcing PC Partridge to admit that he could not be sure if it was actually Lord Churchill himself who knocked his hat off or one of his companions.

It is not recorded what punishment Lord Churchill received for his actions. Given that is was his first offence and that he came from a wealthy and prominent family (his father was the Marquis of Blandford), it is likely that the young Churchill, like so many of his unruly Bullingdon Club friends, completely escaped the consequences of his actions. 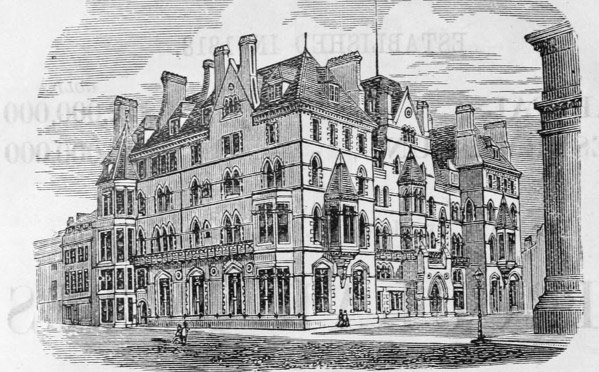 An illustration of the Randolph Hotel that featured in an 1885 travel guide.

About the Randolph Hotel

As the opening of the Randolph Hotel roughly coincided with Lord Randolph Churchill's time at Oxford, it is often assumed that the hotel was named after him. This is actually not the case.

While the name of the hotel may have amused him, and perhaps contributed to it becoming one of his regular haunts, the hotel is actually named after Dr. Francis Randolph, a University benefactor who died in 1796 and who does not appear to have been related to the illustrious Churchill family of Blenheim Palace.