The B4022 Finstock to Charlbury road

A Phantom Coach between Charlbury and Finstock

The road between Charlbury and Finstock is said to be haunted by a phantom coach and four horses.

The phantom coach is reportedly rarely seen, but the sounds of its thundering hooves and clattering wheels can be heard travelling from Charlbury to Woodstock. 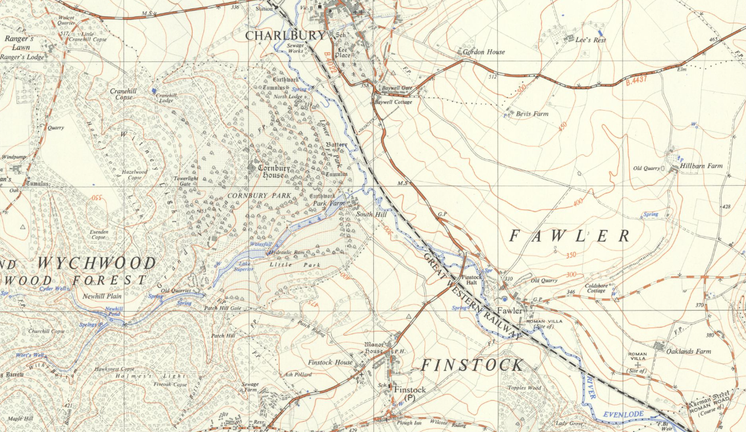 Photo: A map highlighting the Charlbury to Finstock road, c1936

How to stop a ghost

The idea that the coach doggedly follows an earlier route is somewhat contradicted by an amusing story told in Joe Robinson in his book Oxfordshire Ghosts. According to Joe, a party from Charlbury decided to see if they could get to the bottom of the mysterious sounds by blocking the route of the phantom coach with a barricade across the road.

The party from Charlbury triumphantly took down their barricade, but their triumph was short-lived. Apparently, as soon as the barricade was removed the familiar sound of the coach and horses was heard coming back, and with nothing to block its path, carrying on up the road towards Finstock!

Another tale about to the phantom coach takes on an even more sinister turn. Joe Robinson tells of a woman out walking with her young son when they heard the sound of a coach and horses approaching. They were just crossing the road bridge across the River Evenlode at the time, and they stepped aside to let the coach pass.

But as in previous accounts, the sound of the coach came, but no actual coach! At this point, to the mother's surprise her son pointed and said "That lady in the carriage wants me to go over to her". The mother could hear the sound of hooves stamping on the ground nearby but could see nothing.

The son was seemingly unconcerned, in fact, the mother was forced to grab his hand to stop him from walking across the road in the direction of the sounds!

A moment later the sound of a coach and horses pulling away and receding into the distance was heard. The mother later asked her son to describe what he had seen.

The boy's description of the coach was surprisingly detailed. He described a green carriage driven by two men in hats, and a woman with a black jacket, white blouse and hat with feathers in it. The woman looked upset and appeared to have been crying. She beckoned to him imploringly but became angry when the boy's mother prevented him from going to her.

One wonders what would have happened had the mother allowed her son to approach the woman?

The story of the ghostly coach is very similar to one told of the notorious Lord and Lady Wilcote. After their deaths, these despised nobles were said to be seen riding a ghostly coach and four horses up and down the avenue in front of their resident, Wilcote House.

Wilcote House lies only a mile South of Finstock. Could the phantom coach and horses heard travelling from Charlbury to Finstock in fact be the ghosts of Lord and Lady Wilcote returning home?