St Michael's Church, Stanton Harcourt, with Pope's Tower in the grounds of Harcourt House in the background.

The pond known as the Lady Pool at Stanton Harcourt is believed to house not one but two restless spirits, both of whom met their deaths in connection to adultery.

Stanton Harcourt Manor, also known as Harcourt House, is an unfortified manor house with parts dating back to the 15th century. The building's main claim to fame is that Alexander Pope was staying there while he translated Homer's Iliad, but there is darker story relating to another of the house's former occupants.

The murder of Alice Harcourt

According to Richard Holland's Oxfordshire Ghost Stories a Dame Alice Harcourt was murdered there while the rest of her household was at prayer, and her dismembered body thrown out of a window. Details of this are scarce, and no explanation is recorded as to the motive for her murder, or even to which Alice Harcourt the story applies.

It is more likely that the story has become muddled with a series of extraordinary events that happened in 1467, when Richard Harcourt, brother to the MP Sir Robert Harcourt, apparently had his wife murdered after discovering that she had been committing adultery with one of their household servants.

What is even more extraordinary is that rather than hiding his crime, Richard actually wrote to the Pope asking to be absolved of his crime on the grounds that his wife had been unfaithful, and requesting permission to remarry! This was presumably granted as in less than a year he was married to the wealthy Katherine de la Pole, leaving us to wonder whether the accusation of adultery was just a ruse by Richard to get his poor wife out of the way!

Richard's first wife was named Edith and her death apparently occurred at Witham in Berkshire rather than at Stanton Harcourt, but the events were so notorious at the time that it is possible that the story was transposed in the public imagination to Stanton Harcourt, and the name of the unfortunate woman changed to that of an actually former resident at Harcourt House. 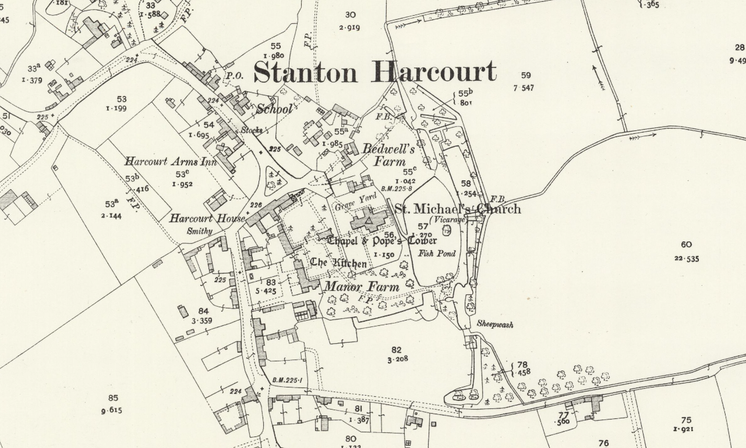 Map of Stanton Harcourt circa 1919, showing the manor house and pond to the east of the church.

A haunted pool at Stanton Harcourt

Whatever the circumstances, Holland reports that Alice's ghost haunted the village until it was finally laid in the nearby pond known as the Lady Pool.

Unusually Dame Alice is not the only ghost believed to have been laid in this specific pool. Holland tells of a Mrs. Hall who lived at the Manor House in the 18th century and who killed herself after finding out that her husband was having an affair with Mrs. Surman, landlady of the Harcourt Arms Inn. As with Dame Alice, her restless spirit haunted the village until finally being laid in the Lady Pool.

As is often the case with legends of this type, it is believed that if the pool ever dries up, both Alice's and Mrs. Hall's ghosts will return and resume haunting the village.