Courtroom Curses at the Black Assize

The 'Black Assize' was the name given to the assize courts held at Oxford Castle in the summer of 1577, during which at least 300 Oxford citizens died of an unknown illness.

According to popular belief, the outbreak was caused by 'a saucy foul-mouthed Bookseller' named Rowland Jenkes who stood trial for speaking treason against Queen Elizabeth I. He was sentenced to either have his ears cut off, or be nailed to the pillory by his ears.

As he was being led out after sentencing the angry Jenkes cursed the court, causing the sickness to fall on all who heard him. Women, children and other prisoners at the Castle were seemingly not affected by the sickness, which fed into the belief that the deaths were the result of some supernatural agency.

Another account of events reported by John Webster in his 'The Displaying of Supposed Witchcraft' (1677) claims Jenkes intentionally poisoned the courtroom with a mixture he had ordered specially from a local apothecary.

He infused this mixture into a wick or candle which he then set light to in the courtroom, and the sickness affected all who inhaled the noxious gas. 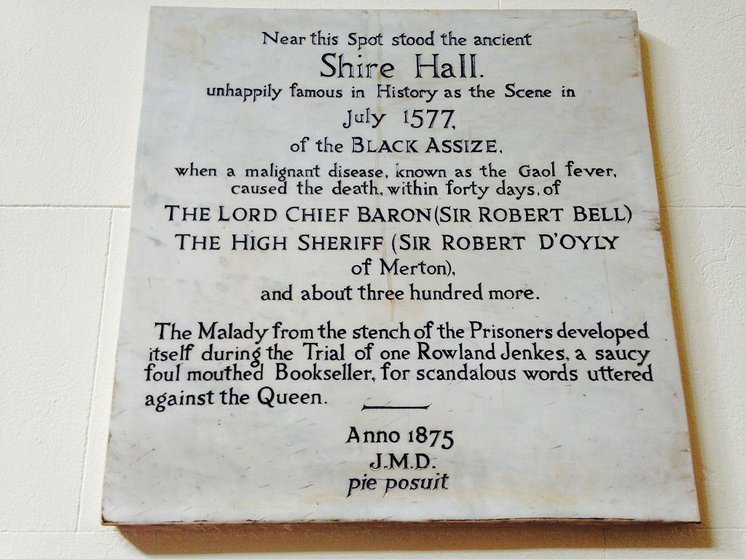 A more rational explanation of the 'Black Assize' is that it was another in a string of outbreaks of infectious disease that swept through towns and cities during the period. There had been an outbreak of the plague in Oxford six years earlier, and diseases like cholera, smallpox and typhus were also common.

Typhus was often referred to as 'gaol fever' as it thrived in the unsanitary conditions in British prisons during the period.

Despite the high death toll, Rowland Jenkes managed to avoid catching the sickness and apparently lived to old age.

The Black Assize is memorialised in a plaque from 1875 that can be found inside the Oxford County Hall. The plaque mentions gaol fever as the cause of the sickness, stating that 'the malady from the stench of the Prisoners developed itself during the Trial of one Rowland Jenkes...'