Before the county boundary between Oxfordshire and Berkshire was moved in 1974 and the Vale of the White Horse became part of Oxfordshire, the boundary followed the route of the River Thames right up to Oxford.

Having the country boundary so close to Oxford caused some unusual situations, such as when at one point drinkers in Oxford were able to catch last orders in the city before crossing the river to enjoy the extra 30 minutes of drinking time allowed by Berkshire's licensing laws!

However, the fact that the boundary between the two counties was marked by a river did on occasions cause some headaches for the county coroners.

A drowning at Kennington

On 7 July 1824, haymaker Charles Andrews drowned while crossing the Thames in a punt near Kennington. When his body was found floating in the river, a dispute broke out over whether it was the responsibility of the Oxfordshire or Berkshire authorities to deal with his death.

Andrews' body was found floating nearer to the Oxfordshire side of the river, but locals refused to allow the body to be brought up onto the Oxfordshire bank because Andrews was a Kennington man and they regarded the matter as Berkshire's responsibility to deal with. 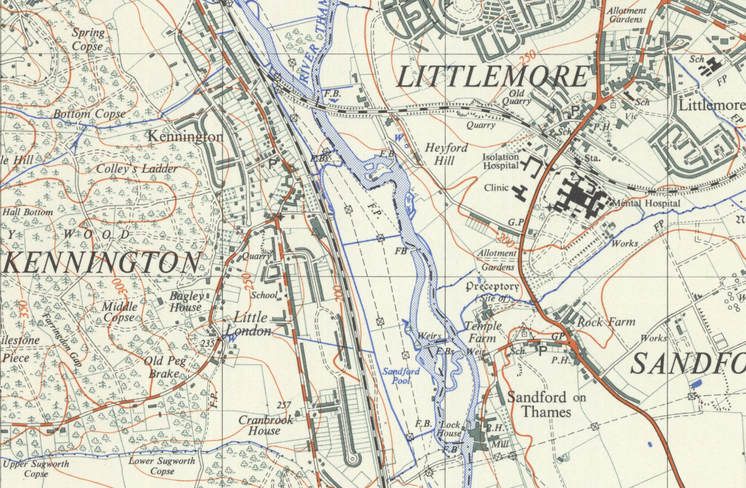 A map circa 1960 showing the River Thames at Kennington

The body is ferried back and forth

The body was hauled up into a boat and rowed to a riverside public house at Kennington on the Berkshire side, but again locals refused to allow the body to be landed, claiming that it was Oxfordshire's responsibility.

Next, the body was rowed to Sandford on the Oxfordshire side of the river, but met with a similar reception to that at Kennington, with locals refusing to allow the body to be brought ashore.

The body is dumped on a towpath

Presumably in desperation, the people rowing the boat finally resorted to dumping the body on a towpath. Magistrates in Oxford were consulted, and they ordered that the body be taken to the nearest public house.

This turned out to be in Kennington, and the body was duly delivered there, presumably to the chagrin of the Berkshire locals who had rejected the body earlier in the day!

The next problem was finding a coroner willing to conduct an inquest to ascertain the cause of death. The Oxfordshire coroner, a Mr. Cecil, refused on the grounds that the body had not officially been landed in the county that he was responsible for.

Eventually, the Berkshire coroner Mr. Slade had to be summoned from Reading and the inquest finally took place, with the cause of Mr. Andrew's death being recorded as an 'accidental death'.

Mr. Slade did take the opportunity to express his disgust at the authorities in Oxfordshire for refusing to deal with a death that took place right on their doorstep.