An aerial photograph of Littlemore Hospital.

The words 'lunatic asylum' bring to mind terrifying images of unlit, bare-walled corridors of cells, ringing with the anguished cries of neglected inmates.

However, the Oxford County Pauper Lunatic Asylum (as it was originally called) appears to have been anything but. 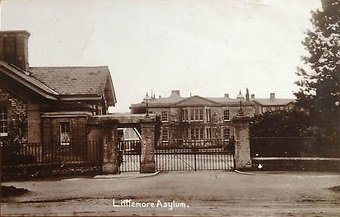 A new asylum for Oxfordshire

First opened on 1 August 1846, Littlemore Asylum was a specially designed facility surrounded by gardens that, from a certain angle, could be mistaken for a rural stately home of the period. It was a product of the County Asylum/Lunacy Act of 1845, that allowed country councils to draw funding for the construction of modern facilities for the care of the mentally ill. It was one of the first of 60 new country asylums constructed in the years following the passing of the Act.

It's hard to say exactly what life in Oxfordshire's new asylum would have been like for patients as trends in care changed a lot over the 152 years that the facility was open. According tocountyasylums.co.uk, there would have been an emphasis on a strictly regimented daily routine.

The patients would have had little privacy but would have been encouraged to work (farming and gardening for men, laundry and kitchen work for women), exercise and take part in social activities with other inmates, perhaps including sports, crafts, art and dancing.

If you think this sounds a far cry from the sensationalised portrayal of Victorian asylums made popular in gothic fiction and film, you'd be right.

However, there was still no shortage of incidents to cause alarm!

An account in the St James's Gazette in November 1884 records an incident that nearly ended in disaster for a visitor to Littlemore Asylum.

The poor visitor was taken to a room by a group of nurses where she was stripped naked, forced to take a bath and then put to bed. Her increasingly desperate protests and struggles only helped convince the nurses that she was clearly suffering from mental illness!

It was apparently a number of hours before she was able to convince the asylum staff of their mistake and she was allowed to leave.