The Eynsham Railway Station Robbery of 1927

In the early hours of Monday 5 December 1927, wanted criminals Frederick Browne and William Kennedy attempted to rob Eynsham Railway Station, and in the process put station porter Frederick Castle through a harrowing ordeal.

Under dead of night

Browne and Kennedy had arrived at the station by car shortly after midnight. To avoid detection the pair had not approached via the main road but had instead driven their car more than a mile along the train tracks to reach the station.

Their main target was the safe in the stationmaster's office, but this proved more of a challenge than they anticipated. They managed to break open the cupboard in which the safe was kept, but found the safe to be both locked and bolted to the floor.

After several attempts to remove the heavy safe by destroying a part of the floor, the pair appear to have given up and instead stole a typewriter and a large box of tobacco, which they transported to their car outside.

It was while they were doing this that porter Frederick Castle arrived on the scene.

Tied to a chair

Castle had been out visiting a friend, and had stopped off at the station on his way home to lock up his motorbike. In the station yard he saw the figures of Browne and Kennedy lurking near a goods shed and called out to ask them what they were doing, at which point Browne and Kennedy produced revolvers and ordered Castle to put his hands up.

They ordered Castle into the stationmaster's office, tied him to a chair and tried to threaten him into helping them open the safe. Unfortunately for Browne and Kennedy, Castle did not have a key to the safe so could be of little help. They fruitlessly went through Castle's pockets in the hope that he might be hiding a key on his person but found only his wallet.

To Castle's surprise, rather than keep his wallet, they returned it to him saying "We don't rob poor men, but the railway company can afford to lose something."

Castle later reported that Browne and Kennedy had in fact treated him with respect and consideration, even at one point offering him a drink from a flask that they were sharing. 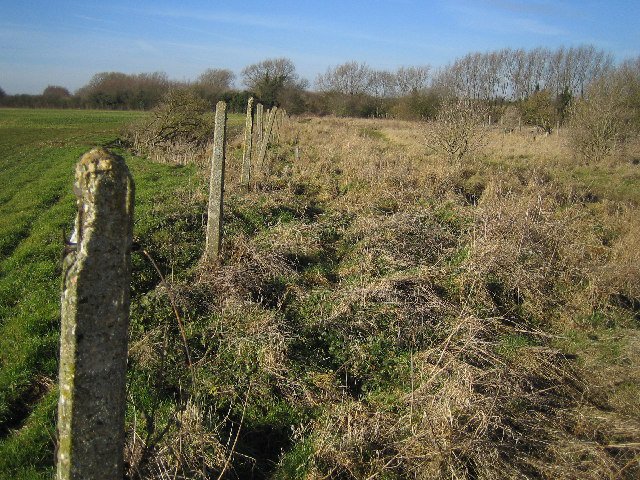 The railway line from Oxford to Witney was closed in 1965, a victim of the Beeching report. Today the only signs that remain of the railway line west of Eynsham are some concrete boundary posts. Credit: Nigel Cox / Eynsham, via Geograph.org.uk

Before fleeing the station with their meagre loot, Browne and Kennedy took the tied-up Castle and left him in a shed some 300 metres up the line, presumably so that he would not be able to call for help.

Probably imagining that they would be long gone before Castle was discovered, Browne and Kennedy then left the station by car.

Thankfully for Castle, he did not have to endure the cold of the station shed for too long. He managed to wriggle free of his bonds and quickly hurried to the stationmaster's house to alert the stationmaster, and the pair then summoned the police.

Browne and Kennedy did not evade the law for long, being captured the following January. The pair were already wanted for the murder of a police constable in Essex the previous September, and it was for this crime that the pair were finally sentenced to be executed.

After a high-publicity trial at the Old Bailey, both men were handed in May 1928.