The Ghost of Reverend Spooner

New College is said to be haunted by the ghost of Reverend William Archibald Spooner, about whom the term 'Spoonerism' was coined.

Spooner was famous for his unintentional habit of mixing up parts of different words in a sentence, often with hilarious results.

A life in academia

Spooner spent almost his entire adult life at New College, first as a student, then fellow, lecturer, tutor, dean and finally warden. Despite being born in London and dying in Oxford, Reverent Spooner was ultimately buried at Grasmere in Cumbria.

He is mostly remembered today for his 'Spoonerisms', but according to nndb.com it is likely that many of his most famous gaffs were actually made up by his students and attributed to him after the fact. 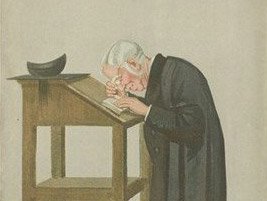 Spooner's ghost should be easy to recognise. He was described as 'an albino, small, with a pink face, poor eyesight, and a head too large for his body'.

There are also reports of another ghost 'possibly a priest, with an unnaturally pallid face', who is said to haunt New College chapel. Some have suggested that this could also be Reverend Spooner, whose albinism could account for the pale face!